Why We Chose: Maldon Sea Salt

The discovery that salt and caramel worked well as a combination is attributed to French chocolatier Henri Le Roux who ran a shop in Brittany – famous for its salted butter. Since his invention in the late 70s – and subsequent awards for his creation in the 80s,  salted caramel has become ubiquitous – and with good reason.

It was inevitable, therefore, that we would receive numerous requests at Goupie for a Salted Caramel Goupie – and we duly experimented.  At the same time we were experimenting with British Pudding flavours – primarily Lemon Meringue Pie and Sticky Toffee Pudding – both huge family favourites.  The result was our Lemon Meringue Goupie and our, now best-selling flavour, Salted Sticky Toffee Goupie.

But we couldn’t use just any old salt.  Both the flavour and texture of the salt was important to ensure that it punched through the richness of the sticky toffee base, whilst not dominating it.  Maldon Sea Salt Flakes were our first port of call.  We use the flakes in cooking all the time at home – so loved the flavour, but the flakes meant that the salt was delivered in the perfect amount – finely ground and it would disappear, and big crystals are just too big.

Like Goupie, the Maldon Crystal Salt Company is a family grown business that is still family run – and is now over 135 years old!

Four generations of master salt makers have been hand harvesting the naturally formed pyramid crystals that have become Maldon Sea Salt’s signature.  Today, the company is in the hands of Steve Osborne, following in the footsteps of his father Clive, grandfather Cyril and great grandfather James. Maldon Salt, which takes its name from the coastal town itself, has been producing sea salt from the works since 1882. 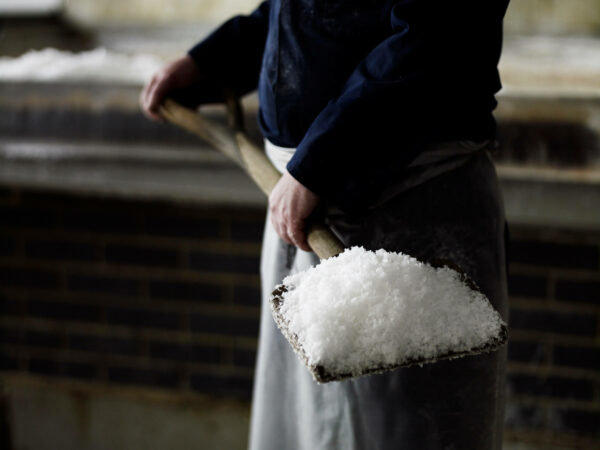 These time-honoured techniques, passed down through the centuries, are the reason why Maldon Sea Salt delivers the same, unique special taste every time. Maldon’s flakes release their saltiness with sweet precision, and add another layer of texture and crunch.

But, none of this would be possible without a little helping hand from Mother Nature. The relatively low rainfall and lush green marshland have created the perfect environment for producing sea salt. Approved by the Organic Food Federation, Maldon salt has a perfect balance of minerals with no additives. 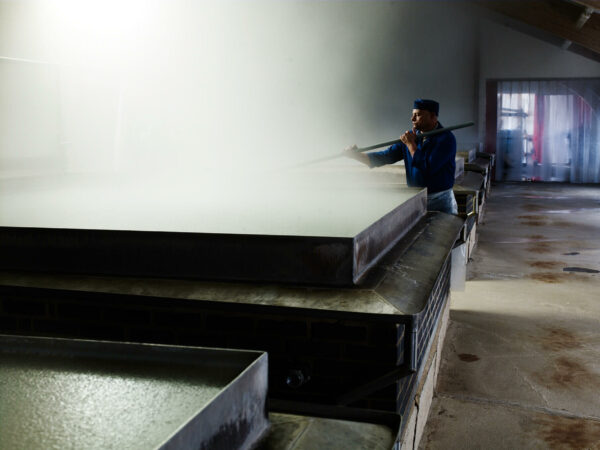 Although the company has exchanged its coal-fired burners for gas, the salt-making methods remain the same, using the same traditional artisan methods as when the company began.   Sea water is taken directly from the Blackwater estuary, pumped into stainless steel pans, then gently boiled and left to evaporate. That’s not to say the process is simple, but Maldon has long known the art of temperature and timing, which is the secret to ensuring these distinctive soft crunchy flakes are simply perfect in both taste and texture.

From its Victorian roots, Maldon today has two sites and has grown from just three salt pans, to more than thirty – now with their own purpose-built facility in the heart of Maldon. Maldon Sea Salt also supports the World Land Trust, helping to protect threatened habitats and wildlife, whilst on their on-going mission to reduce their carbon footprint.

We are delighted to be able to use such a pure ingredient in Goupie, and Salted Sticky Toffee Goupie wouldn’t be the same without Maldon!