Goupie’s been around for over 10 years now, and in that time we’ve done A LOT of shows. Whether it be trade shows, large consumer fairs, local food markets or pop-ups in farm shops, we’ve done them all! Right there next to us at most of these events (especially within Kent) is Charrington’s.

Charrington’s is based on a family farm, just 15 minutes away from our Goupie factory in Goudhurst. Alex runs the farm, and company, having taken it on from his father who originally bought Cryals Farmin the 1960’s. Their speciality is apples! 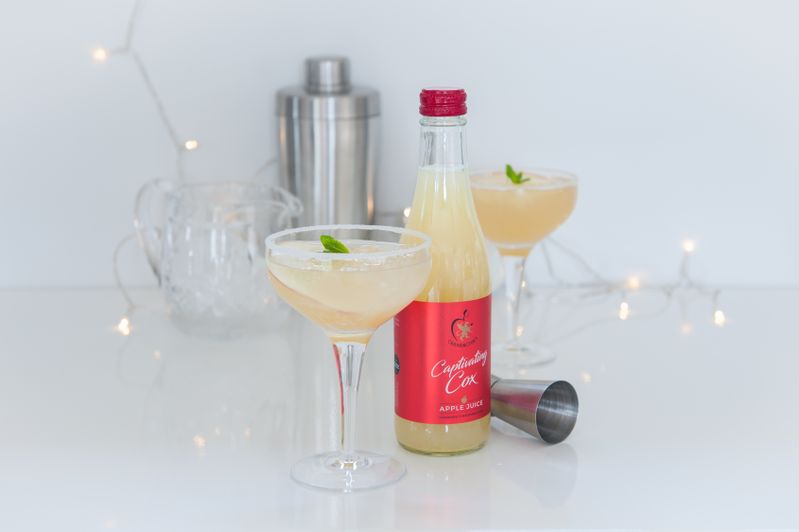 Charrington’s specialises in hand-picking apples from their orchards and using them to create a host of delicious and high-quality apple-based products. This includes sparkling ciders, apple juice and apple crisps! All of which are of course completely vegan friendly and plant-based (apple-based in fact!).

Taste is at the centre of what Charrington’s do. Everything is produced in small batches, such as their Estate Craft Ciders which are fermented to create an almost wine-like quality, perfect for a hot summer’s day! This attention to detail has been rewarded by the huge number of awards they’ve won, including the coveted Great Taste Awards. In fact, EVERY product they make has won an award of some kind. Truly an achievement!

Fortunately, Charrington’s also cares about their farm’s sustainability. They have both a Red Tractor and Linking Environment and Farming (LEAF) accreditation which represents the highest global certification in farming sustainability.

All of their ciders and apple juices are also bottled in glass for ease of recyclability and to reflect the quality within. Charrington’s is able to trace every apple back to the field where it was grown and the day it was picked. For anyone who’s ever attempted to manage traceability within a production line, you’ll know this is no easy feat!

What’s more, is all of their cold stores are run off rooftop solar panels, and their irrigation is managed by reservoirs on-site which collect rain water. Applaudable!

That’s enough gushing from us, if you really want to learn more about a Kentish gem, you should really visit their website!

Fortunately for us, our love of Charrington’s isn’t just a one way street! They’re also fans of us, which is why we’ve teamed up to offer a chocolate and cider combo on their website. Order by Sunday to receive your cider and Goupie boxes for the following weekend. Currently, we’re stocking them with Salted Sticky Toffee and Original, but keep you eyes peeled, there will be more to come!

×
We use information collected through cookies and similar technologies to improve your experience on our site, analyse how you use it and for marketing purposes.
Privacy Policy

We and our partners use information collected through cookies and similar technologies to improve your experience on our site, analyse how you use it and for marketing purposes. Because we respect your right to privacy, you can choose not to allow some types of cookies. However, blocking some types of cookies may impact your experience of the site and the services we are able to offer. In some cases, data obtained from cookies is shared with third parties for analytics or marketing reasons. You can exercise your right to opt-out of that sharing at any time by disabling cookies.
Privacy Policy
Allow all

Always ON
These cookies and scripts are necessary for the website to function and cannot be switched off. Theyare usually only set in response to actions made by you which amount to a request for services, suchas setting your privacy preferences, logging in or filling in forms. You can set your browser to block oralert you about these cookies, but some parts of the site will not then work. These cookies do notstore any personally identifiable information.

These cookies and scripts may be set through our site by external video hosting services likeYouTube or Vimeo. They may be used to deliver video content on our website. It’s possible for the video provider to build a profile of your interests and show you relevant adverts on this or other websites. They do not store directly personal information, but are based on uniquely identifying your browser and internet device. If you do not allow these cookies or scripts it is possible that embedded video will not function as expected.

These cookies and scripts may be set through our site by our advertising partners. They may be used by those companies to build a profile of your interests and show you relevant adverts on other sites. They do not store directly personal information, but are based on uniquely identifying your browser and internet device. If you do not allow these cookies and scripts, you will experience less targeted advertising.

Facebook Advanced Matching can improve ads attribution and conversion tracking. It can help us reach better-targeted custom audiences through our ads. When possible, we will share with Facebook hashed information like your name, phone, email, or address.

Facebook Conversion API Events (CAPI) help us better understand how you interact with our websites. They allow us to measure the impact of our ads on the website's conversions and they improve ads targeting through custom audiences. When possible, we might share with Facebook information like name, email, phone, address.
Confirm my choices Allow all
My Consent Preferences