Where Does White Chocolate & Cardamom Goupie Come From?

White Chocolate & Cardamom Goupie started life after Janet made the family one of her famous Indian feasts. For dessert she adapted a recipe for Gajar halwa and we LOVED it. Getting excited at the revelation that cardamom worked well not only in curries, but sweet treats, Janet quickly moved on to making a white chocolate mousse. Again, it was a raging success, and so it wasn’t long until the combo was added to Goupie! We still get a lot of trepidation when people first come across the flavour, but it’s quickly followed up by full-on obsession.

White Chocolate & Cardamom Goupie is made up of a syrup base which is then filled with toasted rice, biscuit crumb, ground almonds and freshly ground cardamom seeds. This mix is then topped in our special caramel-toned white chocolate. 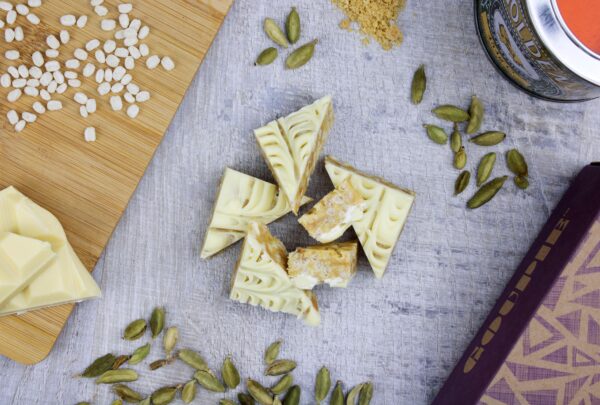 We love White Chocolate & Cardamom Goupie alongside a glass of English Sparkling Wine, ideally whilst soaking in a bubble bath on a lazy Sunday!

This character oozes class, and a soft nature. They’re rarely agitated, and absolutely never raise their voice. This flavour is sweet through and through, but with a touch of the exotic. The kind of lifestyle you watch on Instagram and wonder just how they always look so composed, and their house looks so perfect!

Although thoroughly socialised, and well-versed in polite conversation, they’re more than happy in their own company. This is the kind of character who can turn their hand to almost anything, with seeming effortlessness, never breaking a sweat! It’s easy to underestimate such a gentle character, but to do so would be foolish. There’s much more going on beneath the surface and it’s hard work keeping constant composure!